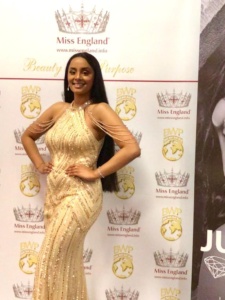 19 year old Ashlyn Mathews, a Medical Recruitment Advisor for Barts Health NHS Trust, has made it through to become a Miss England National Finalist 2019, after winning the South East Miss England Semi-Final that was held on 23rd June.

After completing her A-Levels last summer Ashlyn decided to take a gap year to participate in the beauty pageant, as well as to pursue her dream of becoming a film director and producer. Ashlyn is currently in the pre-production stage of making her very own short film on suicide prevention, which will be released this summer. Ashlyn says of the project: “I decided to direct this film because mental health and suicide is a major issue amongst young people today, and I know that a lot of people don’t understand the dangers of being in such a mental state.”

Since leaving sixth-form, Ashlyn has been heavily involved in raising awareness about mental health in young people. She said, “Sadly, we live in a society where there are major misconceptions and stigma surrounding mental health. There are also particular issues around openness and acknowledgement of mental health issues in the Black, Asian, Minority Ethnic (BAME) community which can cause delays in access for young people to mental health services.”

To vote for Ashlyn text MISS ENGLAND04 to 63333. Votes cost 50p + standard network charge. All votes must be made in the UK and each person can vote up to 30 times a day.

Ashlyn has hosted mental health stalls and has spoken at youth and community events where she addresses the painful stigma against mental illnesses. She said, “Having fought depression and suicidal thoughts and attempts during my teenage life, I feel a sense of responsibility to reach out to young people, proving to them that they can conquer their battles. I realised my life is worth living which empowered me to want to help bring about change in the youth. I fought long and hard to re-gain control over my life, to recognise my self-worth, and here I am pursuing my dreams and living my life to the fullest. I want to encourage young people who are struggling to do the same!” Whilst raising awareness about mental illnesses, she has been hosting charity events in which all the proceeds are going to Papyrus, Prevention of Young Suicide. 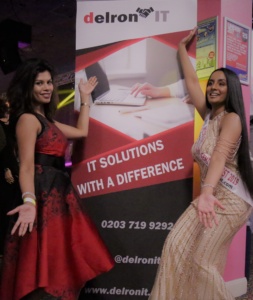 Technical Director, Shola Delip, who has become her mentor on this journey.  Ashlyn says “I am grateful to have met Shola who has believed in me from the moment we met, and through her company delron IT has supported me wholeheartedly.” Despite feeling nervous, Ashlyn is most definitely excited to be involved and to have some fun. A British Indian girl is yet to be crowned as Miss England; perhaps Ashlyn will go on to become the first to hold the prestigious title?

If she wins Ashlyn intends on using the Miss England platform to continue to raise the importance of teenage mental health. When speaking about the pageant she said, “Miss England is truly a fantastic organisation! They develop strong, independent women and encourage them to be charitable. With the platform the competition provides, I aim to campaign to schools on a national level to ensure that mental health becomes just as important as a child’s education.

The Miss England Grand Final will be taking place in Newcastle, between 31st July and 1st August 2019. The winner of the Miss England competition will represent her country at the Miss World competition, which has a first prize of $100,000.  To vote for Ashlyn text MISS ENGLAND04 to 63333. Votes cost 50p + standard network charge. All votes must be made in the UK and each person can vote up to 30 times a day.